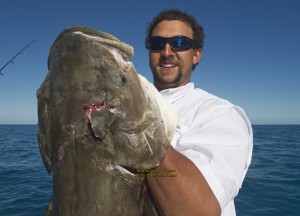 The wrecks West of Key West are well known for their incredible cobia fishing. When setting out of Sunset Marina of Key West Jamie D’Antona asked Capt. Steven Lamp of Dream Catcher Charters (his fishing guide for the day) if there was a way they could try for a larger cobia than the one he had caught a week before fishing out of Marathon Key.  That fish weighed in a 38 lbs. No slouch by any means for a species like a cobia.

Known for hard pulling fights, stamina and wrecking as much tackle as they can when gaffed and put in a boat, cobia (A.K.A. ling) are sought after by many anglers up and down the both coasts of Florida and in the Northern Gulf of Mexico. Desired for their great food appeal and awesome display of power cobia are a prize target for anglers in the South East and no stranger to the boats of Dream Catcher Charters in Key West, Florida.

Taking on the challenge to fish for a larger fish Capt. Steven set out to do what he calls his “cobia tour” hitting the many wrecks and pieces of structure that are well known to him to hold these powerful fish. After about the fourth stop things were not looking all that great as the Gulf of Mexico was muddy and visibility was limited with not much marking on his bottom machine to indicate a larger fish may be lurking.

One last stop for this fish and we need to move to something else Capt. Steven said as they headed further West toward the Dry Tortugas in his Yellowfin 32 center console powered by twin Mercury 300 Verado’s. Sometimes it takes a little extra to put that trophy an angler is looking for in the boat, thats what I am here to do, Lamp said.

About 45 miles West of Key West Capt. Steven started throttling the Intense back and another wreck was in sight. Amazing difference, the water was much clearer and fish were everywhere. Swarming with jacks, permit and many bait fish this had all the indications of a spot where a monster cobia may be lurking.

At first we bolted on a crab on some light tackle to take advantage of the permit all over this wreck till a cobia showed his ugly head. After a couple of drifts and the crab dancing his way between each one of the permit and not getting eaten I could see that there might be some issues, not to mention no cobia, yet.

A few more drifts and some more patience the first cobia was spotted tailing off the back of the wreck. This was a small fish but a cobia non the less. Jamie tossed his bait a live pin fish on a 5/0 Owner live bait hook coupled to a 40lb Triple Fish Fluorocarbon leader of about 6 ft attached to a Key Largo 7 ft spinning rod with 15lb test monofilament make by Stren.

Then up came Godzilla, this Neanderthal sized cobia took the bait as he jumped out of the water giving a tremendous arial display and the game was set we were into a big one, said Lamp.

The fish immediately took off for the wreck then I backed down on him to get my angler a better angle to pull the fishes head up a bit. This worked as the monster cobia felt the heat on his lip and started out away from the wreck. I could not have done this if it were not for the skills that my angler brought to the boat that day, Jamie was great to work with, you can definitely tell he is a professional athlete.

As the fight ensued Jamie and Capt. Steven teamed up on this cobia as reality set in to his size and how lucky they were that the fish did not go right into or around the wreck and cut the line. It was a true tug of war with light tackle lasting 25 minutes till the first gaff shot.

Capt. Steven said, I could see the fish was fatiguing and we were far away from the wreck at this point so it was time to think about sticking him with the gaff. I eased the boat along side the fish with Jamie on my starboard side holding steady pressure gaining what every little line he could to get me closer with the gaff. I had a shot but it was not far enough up on the cobia s head so I shied away. Then, as the fish rolled back toward the boat and I had my left hand on the leader right hand on the gaff with he gaff hook over his head I took the shot. Sank the gaff deep in the fishes head over his right eye pulling him toward the boat preparing to lift him. That did not happen. I pulled to hard, the fish was so heavy I pulled the gaff through his head and out the top. Now, we had a very angry cobia with a bad gaff shot in his head tearing off line like he was just hooked, not good, we had to basically start all over.

As Capt. Steven and Jamie worked the boat closer over another 15 minute period things were getting tense. How much longer would the line, knots, hook hold. Would the fish make a last second run. What will go wrong next?

Once again I eased up along side this fish again realizing his size in the gin clear waters off the Dry Tortugas, this time I would not lift so hard but try and use the boat forward speed to slide him up and out of the water by his head. I got the shot and WHAM! This time I had him tight and solid. I then lifted and brought the fish into the boat slamming him on the deck. It was done, fish was caught and it was way bigger than we thought, by far and definitely job accomplished he was way over 38 lbs. 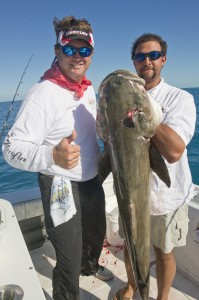 In the boat, all fish get larger especially cobia. A big cobia can really make a mess out of a boat if he is still alive and this fish was no exception. Wiggling worming, flopping and slamming around I put a knee on his head and try to subdue him. This was not happening. The floor bait well was open and this fish made his way into the bait well head first thinking he was going to escape.          Had I left him there I be he would have found a way to tunnel through to freedom right through the bottom of my boat. While this huge fish tried to release himself in my bait well he was tossing all of our bait fish all over the place and making a real mess it looked like a water fountain of bait flying everywhere. This was time for gaff shot number 3 as I lifted him out of the bait well and into the fish box to finish his life. It was done.

What a fish and a great story to boot. The fish weighed in at 64lbs. Later that day Jamie went on to fish with his father and Capt. Steven to limit out on nice sized red groupers and mutton snappers.