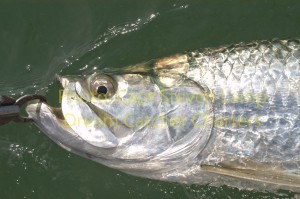 Chumming For Tarpon IN Key West

After 20 years of professional guiding for tarpon and hours of discussion on the matter – many of my anglers have wanted me to write an article about Chumming for tarpon in Key West harbor. About the details and the experience. Because we book all types of tarpon fishing charters (as long as they are ethical) I decided to go ahead and write this piece to help  anglers chose for themselves when they call us to book a Key West Tarpon Trip.

A long standing tradition in Key West is to chum for tarpon in the harbor. This is where Key West captains use a 27 – 35 ft center console boat that can comfortably carry up to 6 anglers on the water for a day of Key West tarpon fishing. These captains take off from their dock near the harbor and head out with their anglers about 1-3 miles away. The run is about 4 minutes and burns very little fuel, this lowers the cost of running this charter for these captains to make more at the end of the day, since they did not have to go out to the reef to fish the areas that these boats are capable of fishing. This is a fun day of fishing for all levels of anglers without having to go very far.

Once the captains arrive in the spot that works for the tide that is present they toss anchor. Most of the time these tarpon chum boats will set up right next to one another within talking distance, many times 10 across. There they will sit till the tide changes, and sometimes sit just till its time to go in trying to bring the fish to the back of the boat. Its a time game, you have to put your time in to make it happen just like any other form of chum fishing.

After anchoring these captains proceed to set up the gear and start chuming. The chum that is used is traditionally shrimp boat “Bye Catch” this bye catch usually consists of the fish and creatures that the shrimp boats scoop up into their nets when they are dragging the grass bottoms of the Gulf of Mexico for shrimp. the critters consist different species of 2 – 4 inch long fish and many different species of crab. The rules dictate that one can no longer “legally” obtain the shrimpers bye catch from their boats directly at sea so the fish houses now offer it.  These days the fish houses offer a bushel of “tarpon chum” that is just one particular species of fish that is bye caught by the shrimpers and they use that.

The process of chumming is taking these fish from the bye catch bushel (gets messy) and cut them into pieces. The pieces are tossed into the water to drift back and attract tarpon and whatever else likes them. After a little while of this method the tarpon start to lock on to the scent (especially if there are 10 boats side by side doing it) and move to behind the boats. A great method for getting a tarpons attention as they are opportunity feeders and not real picky.

Once the captain has established his “slick” and notices some tarpon starting to show up behind the boat he then teaches the anglers the proper way to drop back with a bait and hook up. The bait used is a dead fish or piece of dead fish from the chum on a hook usually with no weight. Much like tuna chunking or yellowtail snapper fishing except that tarpon are not food fish.

As the angler drops back the dead cut bait it will pass through the fed up tarpon and usually game on. The tarpon thinks it is chum and gulps it right in making for an easy hook set. Once the angler is firmly hooked up the captain then drops his anchor to be floated by a ball to save his spot to pull the tarpon from the pack and out in the open away from the other boats. This is when the battle will ensue for the angler standing on the bow of the center console fighting his trophy. As the angler fights the fish the others can get photos and cheer him along. Once the fish is landed the captains try and get a head lifted photo for the anglers and the fish is released.

Without a doubt chumming is the best way to catch the most tarpon in a tide change here in the Key West harbor for anglers. Chumming for tarpon brings a captive audience and turns the tarpon ON to eat with tasty treats. In my opinion not the most sporting way to catch tarpon but, can be very productive, for the anglers that call my shop and ask, How Many Tarpon Am I Going To Catch? those guys need to go out on a good tarpon chum fishing boat. If numbers are your game in tarpon fishing, this is your trip. Read On…

Ethics Of Chum Fishing For Tarpon

Its not a bad thing. I have heard many theories about the excess of chum on the bottom, even the changing of migrational patterns of tarpon coming through Key West. I don’t subscribe to any of them. The way these captains fish with chum is totally harmless to the fishery and in fact, because they use such heavy tackle most of the time, the tarpon is whipped faster therefore released before total exhaustion occurs. As long as the guide does not lift the larger fish out of the water or use a gaff to put holes in the fish this method of catching a tarpon is fine.

Its chumming how sporting can it be? it takes the hunt out of the game as you are bringing the fish to you with a natural attractant. (kind of like shooting a cow at the feeder). Using dead bait to catch them. (thats just kind of boring to me) and bigger tackle to hoist the fish up to the boat with power and might over fines  and technique.

As a Fishing Charter

Chumming for Tarpon is a great way to go.

When booking a Chumming for tarpon trip note that this is what you will be doing, your whole trip. There may be some by catch such as a cobia, permit, shark or jack but when you book this sort of trip these boats stick with the plan till its time to go in. In contrast to that, the bay boat fishing we do is more versatile to changing it up and doing other stuff.

Here at Dream Catcher Charters We will run the trip sometimes but most of the time we recommend a fishing guide that offers that sort of fishing day in and day out for the angler to gain the best advantage.

Cost Of A Chumming For Tarpon Charter

The costs for these tarp0n fishing charters are a bit pricey for the distance traveled but not for the reward. Prices fluctuate from boat to boat and start as low as 550.00 for the half day. Best thing to do is give us a call and see what the rates are for the boats that may be available.

So there.. thats what chumming for tarpon here in Key West is all about. Not much glory but can be some pretty good fun.

Please note – At Dream Catcher Charters and me myself we prefer live bait, artificial and fly fishing for tarpon not for any other reason than they mass amount of anglers that visit our business here at Dream Catcher Charters request the use and the versatility of smaller bay / flats boats,  live bait, fly fishing and artificial. I / we consider it more sporting and just as fun. We are very good at it and our anglers learn even more about finding fish, techniques and fishing itself.

We still run some chum trips on our 32′ Yellowfin center console and are happy to get you out there.

Call My Office To Reserve Any Fishing Charter In Key West Including Chumming for Tarpon. We are happy to help you pick the right trip for  your needs. My Office number is 1-305-292-7212