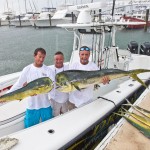 Sea conditions were ruthless on the first day and things were tough limiting the team to how far they could reach, but day two Capt. Rob pulled off the stops with better conditions and made it happen with a 38lb Dolphin winning largest fish in the tournament. That fish matched with his second largest dolphin gave the team best aggregate weight and then having won two divisions they pulled off the Top Boat award.

Rob said it went like this… The big fish we boated was a bull and he came in with a nice cow right behind him. We hooked up on both. Max had the bull as it took for the open water and the cow shot for the weeds. I hedged my bets on the larger fish and chased Max’s bull as the 30+lb cow was dumping my 20# rig like a water fall. We lost her and held on to the Bull. That was first thing in the morning, I knew it was going to be a good day.  We knew then that Max was in the running for heaviest fish. 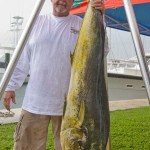 Max Harding with his 38lb Dolphin on the scale.

Capt. Rob has run Yamaha’s on his own boats for many years and cannot get over the incredible ease of use with Mercury Verado’s. He says, “Ya cannot hear them running but the boat is still trolling so ya know they are back there”.. Furthermore he added that the Verados are very strong at low speeds holding the boat up as he throttled back to take the conditions. “I burned 30% less fuel with this larger boat and more horse power than my personal Yamaha powered rig, its really incredible”.

Capt Rob went on further to say that the Yellowfin 32 is an incredible blue water machine with no fear. Day one was VERY rough and she handled it like a champ all the way out to the Wall South of Key West in occasionally 8 ft seas and 28 knot winds. Sure a 47ft sport fish would have been nice but this Yellowfin is perfect. “You don’t need to run her hard just let her eat and the boat will take care of you without pounding and slamming”.