By Capt. Steven Lamp – Flats, Backcountry, reef and deep sea. How bad can August be? Well, it was pretty bad. Wind, wind and windier. But we Fished and Caught. Glad that is over. August 2013 was the windiest ever. It was almost like March but not as strong. Usually August is a 5 mph and variable month with crystal clear waters and amazing flats fishing and reef fishing days. Lets put that behind us..

Here at Dream Catcher Charters We have been running trips like its our job.. Oh wait, it is our job. To take people fishing. The last week has provided our anglers with an assortment of fishing opportunities both in the backcountry and offshore.. 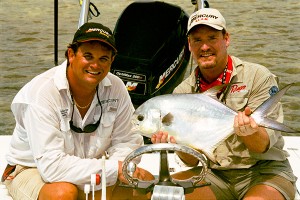 Things were tough in the last few weeks.. If we got a break in the winds then it rained. but none the less permit and bonefish were caught as with any August seasonally. The tarpon fishing on the flats has moved to deeper waters during the day but still an easy shot from the flats edges of the channels with a live crab or Hogy Lure. I cant say any grand slams were caught the last few weeks but people none the less were having a good time fishing the shallows and challenging themselves with the shots they got. Winds are laying down and the Key West Redbone SLAM will be in two weeks. Its time to pre fish..

Flats fishing charters are a technical yet fun way to enjoy your day on the water for 2 or less anglers. You do not need to know how to fly fish to go flats fishing… September and October are BANNER months for flats fishing here in Key West with big bonefish, permit and baby tarpon. Give us a call to find out more.. 1-305-292-7212 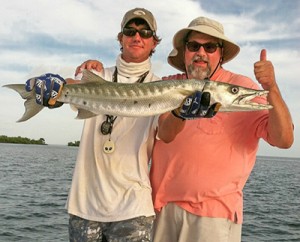 Out bay boats have been going out ever day. With the full moon last week we got into some cool stuff on the flats and out on the patch reefs with a great snapper bite and goliath groupers.. Big barracudas have been caught on light tackle top water plug action in less than 2 feet of water as well as some substantial tarpon fishing too. Capt. Tommy Z had a great day tarpon fishing just yesterday with a nice fish landed using a Hogy Lure first thing in his day (Capt. Tommy uses the black 7″ original Hogy on a custom hook set up). Shark fishing has been a great back up for our backcountry fishing charters as they are big, pull hard and fun to fish for.

Without a doubt the most popular way to fish in Key West. Bay boats can carry up to 4 persons to help split the cost. Float shallow to help catch the fish and keep you comfortable to enjoy your day. We use Yellowfin Yachts as our choice of bay boats here at Dream Catcher Charters. Give us a call to go fishing the shallows of the Key West backcountry.

The fleet is all over the place with catches from the deep. Capt. Rob reports mostly school dolphin but some great shots at marlin, tuna and wahoo. On the Reef and Wrecks the snapper bite is EPIC. Last weekend the feds opened up a three day red snapper season and everyone that I heard from was able to limit out especially that the winds laid down..