Tarpon season is full of image opportunities like this. 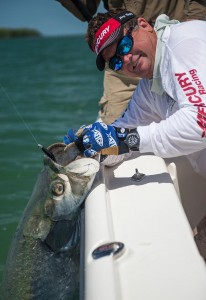 Capt. Steven Lamp has a Key West tarpon by the Jaw for a photo and quick release.

May 27th 2015 – What an odd tarpon fishing season once again. The weather has not been too unusual but this is the second year that the winds have blown in May making the shallow water fly fishing for tarpon kind of tough. The rest of it though has been pretty good here in Key West. The early tarpon migration has seen a few cycles this year but none that has left us without tarpon.

Weather wise the winds came up over the Memorial Day weekend to a nice brisk “March Like” 20 mph with gusts to 25 Out of the East as a high pressure built in over the Eastern seaboard. These winds are expected to continue through this coming Friday the 29th. Next week looks decent at our pattern goes back to more tropical with SE winds 10 or so over this coming Full Moon period.

The numbers of tarpon in the Key West area have not diminished at all but the traffic has. After the Memorial day weekend we saw a huge relief of boat traffic trying to get shots at our Key West tarpon as many part time fishing guides and DIY folks start to go home and fish their own home waters, tourist season starts to slow making bookings lighter and therefor traffic is lighter on the water even more. This is my personal favorite time to go tarpon and flats fishing with my anglers as its starting to get peaceful and some of those remote pieces of water I enjoy fishing are available and not crowded. Truth be told, this is when MY tarpon and flats fishing season starts to get really good.

The Harbor has its typical group of guides and anglers stacked up chumming the tides for the hook up. Both tides work well and the fish are numerous. If its windy this can be a bit “sporty” but these boats are typically larger to handle that. In smaller boats the actual harbor has been tough to fish due to the higher winds. As the full moon comes the evening bite out there should be pretty epic with low tide falling in around 6 pm or so. Rumor has it — There may even be a Polalo Worm hatch.

On the Flats the fishing along the beaches has been steady but once again the winds the last few days have been tough to stake out on and get good shots on the fly. Creative spots are important here that are out of the waves but still offering the stream of fish we are all so used to seeing year after year. I expect the stream to continue for at least the next two weeks. One more reminder of the Full moon next week. Super early morning or late evening will be your best bet.

In the backcountry there have been fish for months now. The backcountry is the first place to get them and the last place to lose the numbers of tarpon for the season. Channels, flat edges and basins have all been holding a decent number of tarpon but with the higher winds its been tough to spot them before floating over them and get a shot. That said the channels have been our best bet lately for consistent hook ups for tarpon here in Key West using both live bait and artificial this has been a great way to fish even in the higher winds.

Best Bet For Tarpon will be your backcountry trips or harbor chumming trips through the end of this week. higher winds dictate the comfort of a bay boat or a larger center console. Next week we have the full moon and the sporting possibility of sight fishing for tarpon gets really good so I would stick with the bay boats to work the flats and backcountry or a traditional flats fishing boat if you want to challenge yourself.

We offer backcountry and flats fishing for tarpon here at Dream Catcher Charters. We use bay boats mostly as well as flats boats for our more “traditional” clients. There are some openings in our schedule for June. If we cannot help you we might know a trusted reputable guide who can.
The best thing to do is just Give Us A Call.. Find out more..