November 18th 2017 – If you enjoy fishing at all you will love catching some of our big jacks on our Key West backcountry fishing charters this time of the year. With massive amounts of bait all around these fish are power feeding like champs. Its a good time for anyone that can toss a line and wants to catch a fish that pulls harder than anything else any where. 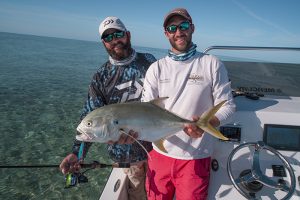 Fun times on the flats when the jack attack happens. Often found tailing behind sting rays when we are flats fishing. We find jacks in many different places. One thing is for sure, we always find them hungry!

The Jack Crevalle is the under-sung hero of the backcountry fishing charters we do here at Dream Catcher Charters in Key West. These guys hit like freight trains and fight like its a sport. Where there is one there is usually 3 dozen and for folks who like to keep the rods bent the jack crevalle sure puts on a show. Check him out on WikiPedia . Jack Crevalles are found all up and down the Atlantic ocean ranging in size from a common 2-4 lbs to a trophy 20 – 40 lbs. Seasons for these guys are pretty much all year but we get the larger ones while fishing the Key West backcountry during the winter and cooler water temps. Jack Crevalles can be fun on both spin fishing tackle (we use 10lb test in the backcountry fishing) and fly fishing gear.

Voracious eaters the Jack Crevalle follows schools of bait fish in packs. Relentlessly pounding the numbers of bait in a school till something else comes along. When the jacks are feeding they can be a one right after another fishery. Many of our anglers love to catch them and some of our more “refined” anglers prefer to pursue thier more dignified and much harder to catch local cousin the permit. Both live just about everywhere in the water column from the shallowest flats to the deeper parts of the reef. The jack crevalle seem to be a bit more of a roaming fish than the permit and much less choosy eaters. Permit love crabs and shrimp while Jack crevalle love just about anything that moves quickly and erratically.

Drawn by sound and scent its easy to attract the packs of jack crevalle that might be in a channel or an area. I like to use a heavy popper that really moves a bunch of water and makes lots of racket. I cast a few times with the popper in some areas to see who might be around. Whacka Whacka and WHAM! there he is.. Careful when boating the Jack Crevalle when using a treble hook popping plug or any multi hook rig. They will jump and wiggle really hard and you might just get hooked too.

The Jack Crevalle have a close larger cousin that lives in the Tropical Pacific called the Giant Trevally. Many fly fishermen spend a good bit of time pursuing this fish as a trophy catch in many exotic locations.

As I mentioned winter is a great time for the larger jack crevalle to come into the shallows of Key West chasing bait fish. Here at Dream Catcher Charters we are always ready for them. Another great way to hear the drags burn and see anglers smile like giddy school children.