Flats Fishing Key West For Permit In May

Full moon this weekend was pretty awesome but the fishing was pretty slow in the mornings.

Outside the Mutton spawn that went off this weekend during the full moon the fishing was “ok”. Inshore the tarpon were doing pretty well in the afternoon and evenings. In the morning they were around every where but Fed Up like drunken sailors after partying all night in the brilliant full moon eating pretty much everything they could see. As the moon wanes this week the tarpon fishing will get good in all tides and times of the day. The water temps are still down even though it has been unseasonably warm.
On the Flats though the permit came back with a vengeance, Capt Kyle of Dream Catcher Charters caught this massive beast  with his anglers off the flats North of Key West on what was a PERFECT Florida Keys flats fishing day. Big full moon tides are my favorite for stalking permit in areas they  are not able to access every day. Great place to provide them with a tasty crab and make their day. As the days go on the flats fishing will become absolutely incredible with better weather and increasing numbers of fish cycling throughout.

Offshore the fishing reports that I got over the weekend or lackluster.. Some dolphin were caught on positions of opportunity if you were lucky to find it. One group of anglers caught several dolphin over 10 lbs and one wahoo about 25 lbs off of a floating piece of bamboo. Lucky. The rest of the fleet said the bite came on late in the day which is typical to a full moon. 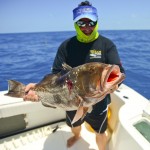 Wreck and reef fishing was as well a little slow yesterday but fun none the less. The full moon had the groupers set up on an afternoon bite. We managed to put some nice filets on ice with a couple of 12 lb red groupers and some 8-9lbers. The mangrove snappers were studs in the 4-5 lb range. Lots of smaller grouper were caught..

Outlook for May. The weather looks awesome. I have taken a look at the computer models and SSE at 10 is the average norm. Give us a call and book it up we have some availability for you to chose from for the coming weeks.

Call Gennifer here at Dream Catcher Charters 1-305-292-7212 to get your reservation in the books.