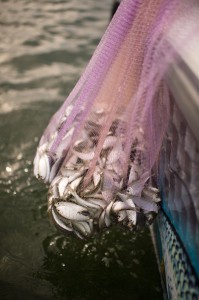 Lots of Bait Off Key West

Lets talk about that bad assed harvest moon we had over the weekend. Impressive. I saw some nice images taken of it and here in Key West it was truly spectacular.

Key West Fishing across the board has been decent. I spoke early with the Triple Time a larger sport fishing boat here in Key West that specializes in deep sea fishing and they had a less than stellar day yesterday, not many remarks just considered slow. Typical this time of the year however when those guys hit it, its game on and chaos ensues.. Many captains are going out and hitting the seemingly consistent day time sword fishing that is just south of Key West. Some fish up to 300 lbs have been caught lately.

The reef bite has been lack luster more because of the weather. We have had some funky low over our heads for what seems to be a week now. Iffy winds and tough visibility have kept boats from heading out I am sure. I fished a few days ago and after hitting the copious amounts of bait we have here out of Key West we did well on grouper and snapper (see my Trip Advisor Review Here) . Enough for a great dinner for my people and some fish left over. Some nice Yellowtail snappers were caught as well as mangroves. We made it a really fun day by going after big barracudas with super light tackle (10lb Test) and had a ball. Fish up to 36 inches were caught and lots of smiles ensued.. I am back at it tomorrow with what I am sure will be a stellar day.

The flats is where its at not be a poet and not know it.. yea,, anyway, if the visibility is on your side then the flats are where you need to be for some great bonefish action and permit action. October is my Favorite time of the year for both of these species. Flats season I call it the SLAM season. Bonefish up to 8 lbs are found to the east of Key West and offer an ENORMOUS fight. A fish of 13 lbs was caught in Islamorada last week.. Nice..! We fish for bonefish with live bait, artificial and fly fishing. You are going to need a guide.. Call my office to set one up, we will get you taken care of.. 305 292 7212 is the number..

The backcountry is the next fun place to be. Coupled with a nice time on the flats the backcountry has been choking up some incredible early season trout. Yes.. Speckled sea trout, not only hard fighters on light tackle but great to eat. Also in the backcountry we are finding some shots at large lady fish and jacks. A great time for anyone who wants to bend a rod and have some fun.

Our backcountry fishing charters are the best way to stay in calm waters, see the beauty of Key West and not get sea sick yet catch the hell out of some fish. Our 4 hour trips commonly come in boasting of 45 fish caught over 18 inches in all species.. Great light tackle fun.

Questions about fishing. Call us. Ask away..!.. Call 305-292-7212 Or check out our web site and see what we have to offer in the way of trips and rates. www.dreamcatchercharters.com Ask for Robert or Island Genn.