Happy New Year everybody we wish you all the happiness in the world.. And may your fishing days be filled with tight lines and screaming drags..

On To The Fishing Report

Its been really great the last few days especially with the winds at 5 and temps in the mid seventies.. I personally have been fishing a mixed bag of offshore West wreck and reef to the South and on the reef and then flats fishing.. The captains here at Dream Catcher charters have also been doing some incredible backcountry and flats fishing as well. Lots of families in town so father son trips prevail. Its all been really fun and productive. 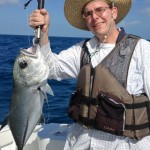 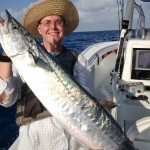 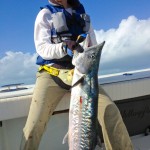 Her First Kingfish. Makes a pair of Kings

Start with wreck and reef fishing we were out west and into some fantastic mutton snapper fishing. We did not have to run far but we got some nice fish in the 9 – 13 lb. range.. The water was dirty over some of the wrecks so I was unable to compound there with much more than a nice sized barracuda.. But.. out on the reef we were into some HUGE cero mackerel up to 9 lb.. These are the only good eating (without smoking) mackerel in my book and we caught plenty along with some nice yellowtail snappers to round off the meal for my folks that day. to add to all that we also boated a nice pair of kings in the 30# range with some hard pulling horse eyed jacks.. On another trip we went after a nice selection of yellowtail snappers to 22 inches. 4 people fishing with me were able to take home two large zip lock bags of Yellowtail snapper eating filets for their efforts on our half day trip to the reef.

My trip yesterday was epic fishing with a man from the North East. We were into some serious sport fish in the shallows. Huge tarpon to start off the day we were casting plugs to them and got two to eat but shook it off immediately. These fish were PIGS! They had to be the largest tarpon I have ever seen here in the winter time. After the tarpon persuit mellowed we started shaking the tree edges and got into some redfish on the fly. EPIC.. two fish hooked and both lost in the roots….grrrr.. That was almost as fun as the Snook up to about 10 lbs that were snaking us all over hell and back to break us off as well. My angler just couldn’t stop them. Well not to be outdone, we then proceeded at around 11 to go permit fishing on a South facing flat on an incoming tide with live crabs. The timing on these fish was impeccable. About every 5 minutes or 100 feet of flat covered we had a shot at either a nice big tailer, a static floater or a pair of micro perms. My anglers casting efforts garnered him a nice hook up with a suicide permit that ran right for the boat. “think” went the line and he was gone. Bummer 🙁 better luck next year on that. So we then finished up the day with large barracudas on the flats.

The captains of Dream Catchers have been into the same stuff as i have. Redfish, trout, jacks, mutton snappers and more. Shark fishing has been a popular trip for our anglers to book this week and plenty of hook ups have ensued. Mark Derango from Dallas TX. A young man of 8 years old this week caught a 60 lb black tip to the boat un assisted.. Nice work little dude.

So there you have it.. Our happenings here at the Dream Catcher Charters in Key West the last few days..

To learn more just give us a call and we will give you up to the minute details.