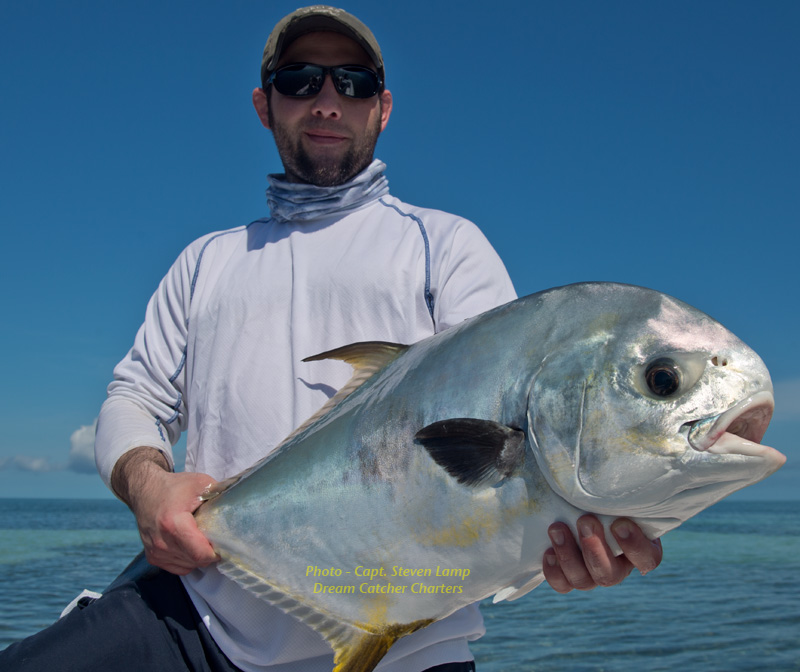 Starting off early is great for tarpon fishing here but for a quick tide shot at some sight fishing for permit and bonefish I decided that an 8 am depart was great for me to pick up a last of the out going and first of the incoming tide in an area where my logs told me there would be some opportunities lurking. Fishing with a regular customer of ours but our first time fishing together. We set off in my Lake and Bay flats boat. Nathan had landed many tarpon and some other species with our guides here at Dream Catchers and now his dream was to get shots at and catch a nice permit or bonefish that was sight fished on the flats. He was up for the task… 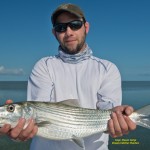 First day was off to a decent start, the flat felt fishy as I worked the shallows of an edge falling out with the tide. Shrimp in Key West have been scarce so it was an artificial sort of morning using a special tied buck tail jig that I am fond of in grassy areas for bonefish. Working the skinny water many smaller sharks were looking for some fun as well. Backs out of the water they are easy to note the difference from that of a bonefish. The bones were cooperative coming through in schools of 6 – 10 in the smaller sizes. Shots were made and things just did not come together. I spotted some fish tailing right up on the shallowest part of the flat. The cast made, Nathan was hooked up large on a nice bonefish. Weighing in at 6.5 lbs. A very respectable Key West bonefish.

Moving on down the flat we poled a good ways. Interestingly enough there were an amazing amount of tarpon in the channel just to our backs, but Nathan was on task for his tailing permit. The tarpon were not going to be harassed today. A few more shots at bonefish were made but no connection as we got to where I knew some permit would be poking about. 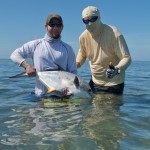 Now using the bonefish rod as a secondary to the permit rod we made ready with one of the few crabs to be found in Key West for permit fishing. Not long at all and we had our first shot of the day. three nice fish working a shallow spot of the flat just ahead and what luck, working our way. Nice.. A cast was made and the largest of the three fish ate and Nathan landed his first, largest and sight fished permit. 23 lbs. Nice first fish. It was a real fighter too making many runs across the flats. And that was a wrap on our first day of flats fishing..

The bonefish Gods were making things a little tougher. with some high clouds for tough viability. we go into the flats a little early in the tide but that did not mean the fish were not there. After being mugged a few times Nathan landed a nice jig shot right into the middle of some bonefish traversing their way from shallow to deep for his second sight casted fish. This fish ate well and fast. Coming into the scales at 4.5 lbs. Now we were off to compound on some permit.. 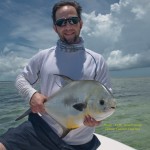 It was a slow mid day on the hunt for permit. We saw a few fish but the water was moving slowly and the fish were super wary blowing out early before we got in range. as the day progressed I felt a geography change was needed to get our shots. so I jumped and made a 15 minute run. It paid off.. Right off the bat we had a shot at 12:00 but the crab landed at 11 then a 1:00 again 11. Now Nathan was angry, silence fell between he and I as he realized any chance of bettering yesterday was fading. Then I spotted a nice fish tailing on the flat in a white spot. These fish can be super spooky on the white.. I took the time to explain exactly where he was to Nathan, he said nothing. Do you hear me? he nodded.. Ready? nodded, Cast!! He did and the shot was Perfect.. 10 minutes later we landed a nice 13lb permit to add to his list.

If you would like to fish the flats of Key West or the Lower Keys with Capt. Steven
Call 305-292-7212
www.fishingkeywest.com