I was fishing for Dream Catcher Charters with some folks on the south side of the Marquesas Keys on board my 24 ft Yellowfin Bay boat just like any other day. The weather was great with a nice refreshing SE 10 mph breeze and the fishing was pretty good too even as we approached the full moon. My anglers and I were working some patch reef to the South when I noticed off to my West a raft with several people in it coming to my view.

Having fished the Marquesas Keys most of my 20 year career here in Key West I have seen this scenario play out before my eyes many times before.. Cuban refugees seeking asylum in the US on anything that will float rowing, sailing, swimming their way to American soil to become a citizen. The deal is under the Wet Foot Dry Foot act that was revised in 1995 IF a Cuban refugee (not haitian, mexican, german or any other) makes it to the dry soil of the USA under their own power, They are allowed to stay and eventually gain citizenship in the USA for life. There are many other “perks” involved here but that is the jist of it.

Once I visually confirmed this was the case I told my clients that a different part of my job was getting ready to take precedence over our day. See, as a captain one of the things we have taken on is safety for life at sea. That part of the job required me to investigate and make sure there was no one in need on board that raft. My clients were all about it and somewhat excited to see for the first time a migrants struggle for freedom and were surprised when I told them, and pointed out all the skeletons of refugee boats from the past that litter the shores of the Marquesas, that this happens all the time. It was time for me to put away my conflict with our governments laws and be a good human being to ensure these folks were ok.

As we got closer to the raft we saw 9 refugees in total 2 were female all were adults. While I took a survey before we got to close I was in touch with Coast Guard Sector Key West to give them a run down on my observation. The Coast Guard until this point was totally unaware and requested further details as I got more info.

After establishing coms with USCG  I approached the raft, at that time they dumped some remaining fuel over board and possibly a broken outboard motor leaving a sheen of fuel on the water 50 yards square. As I approached the refugees started to paddle like hell.. In a desperate move the refugees started to jump off the raft and swim for the beaches of the South end of Gull Key in the Marquesas thinking I was there to prevent them from making the beach. One of them actually swam toward my boat telling the others to run for it, I think he was going to sacrifice his own freedom so the others could make it. As I backed down hard to keep the refugee from approaching me I explained  In my worst and non existent spanish to ensured them I was not police or federal and to get back to the raft and stay together. I was just there to check on their safety and give them water. Amazingly all went well with this exchange as the group came back together. At this time I got closer to observe all hands were in seemingly good health and they were very elated I was not the USCG. 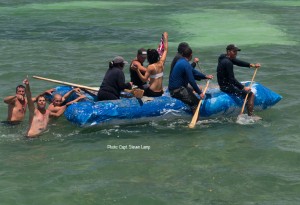 Once I saw the  settling mood come over the group I moved in a little closer, within throwing distance for us to toss over bottled water. We gave them all we had to offer and they drank it. This exchange helped me realize there was no one hurt and all were in good shape in turn reported to USCG and was advised small boat was en route to our location.

I backed off to observe and continue monitoring the progress after we passed the water to these freedom seekers, thats when another Captain who was out there fishing stopped by to tell me there were 22 more refugees already on the beach on the West side of the Marquesas. He sped on with his anglers headed back to Key West apparently his day was done. At this point I was on my Satellite telephone in direct coms with Sector Key West advising them of new developments and the additional refugees.

The communications to the Coast Guard were completed it was time for one last pass by for some photos that I needed for my own collection as the refugees were ever closer to making it to land… Thats when I saw what was in this photo. The young lady sitting in the middle of the raft Held up a flag. It was an American flag. She knew – that after that long journey in that tiny 18 ft rubber raft with 9 people over at least 100 miles of water – She knew she was free.