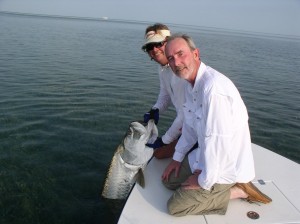 April 21 2013 – Full moon coming up, smooth weather and perfect conditions for backcountry tarpon fishing, beginning of tarpon migration and the return of the migrating permit on the flats.

We have been busy as heck here at Dream Catchers taking our folks out on the water and showing them a great time. The last two days have been tough on the tarpon fishing with a lack of flow from a meager mid moon tide, however not to fear we still put fish up and bent some rods..

This coming week things change a bit. With the heat the fish will start to move shallower and the official “tarpon migration” is right around the corner. The tarpon are here but they are not in migration mode just yet. A few fish have been spotted on the flats and lots of fish are laid up in the backcountry but next week might get them to do the parade down the beach where strings of dozens and hundreds of tarpon move along in the shallows in search of a mate and a snack… If you have not secured your tarpon fishing guide yet.. DO SO….

Flats fishing will heat up with the weather. this past week was slow on the bonefishing with few fish reported being caught or seen. I poled the flats all last week and saw many fish but our main focus was permit, where we had lots of shots at them as well.  Out in the Marquesas Keys tailing conditions were present for permit in our “special” areas but our anglers thought hitting each fish in the head with a crab was the key. Not so much…

Permit fishing will improve right on into May. Not that this month has been bad at all for permit. After this full moon the numbers will pick up. What IS on the flats now are Slobs.. and Micro permit. Great time to catch your beast of a permit out there all alone tailing up a storm on the flats here in Key West.

Flats Fishing Trips are being offered here at Dream Catcher Charters on board our state of the art flats skiff “Indigenous”. Fish with Capt. Steven Lamp on board this boat that he re incarnated from his flats fishing tournament days.