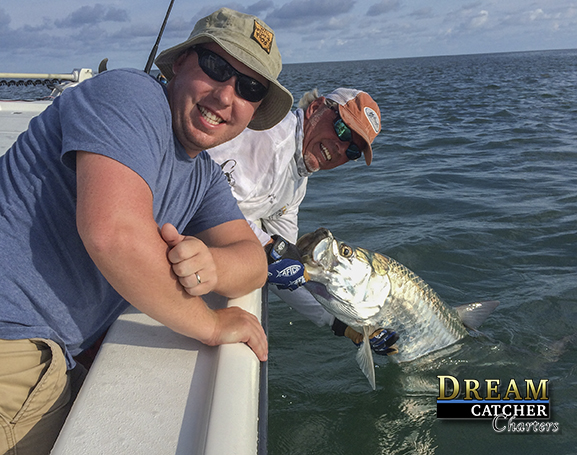 Capt. Tommy of Dream Catcher Charters is holding up a nice Key West tarpon for release for his client.

Capt. Tommy of Dream Catcher Charters is holding up a nice Key West tarpon for release for his client.

June 23rd 2015 – The crowds are gone but the tarpon remain here in Key West. Not so many tarpon on the beaches as there were in the migration but we still have tarpon in the channels and they are eating pretty well.

My last couple of tarpon fishing trips have been relatively successful. This time of the year I will fish for tarpon in the very first part of my fishing charter. Starting off around 6 am first light I head to my popular haunts and work the early morning fish with live bait and artificial baits. By 9 am my folks and I are ready to move on to something else because there are so many other things to do out there now for a chance at the big three of tarpon, permit and bonefish.

The last week or so of tarpon fishing for me and the guys at Dream Catcher Charters has been tough. Tough not because the tarpon are not here but because of the copious amounts of Sargasso weed that had rolled in on the windier than normal SE winds. Mats of weed lines were in the backcountry. With 15 – 20 mph winds it was VERY tough to get a fly or bait to the tarpon as they moved through. Frustrating to say the least.. But good news, by Friday of last week the winds played down and the grass was elsewhere putting things back to normal..

We are still booking tarpon fishing charters and from what I see I think that our anglers will have good shots at tarpon clear into July. Remember that there are a bunch of other fish to fish for as well. We have the perfect season for the All In Wonder fishing charter where we fish the backcountry, flats, patch reefs, shallow wrecks and offshore reef for all of it in one day.

Give Us Call if you want to book a tarpon fishing charter..
We are happy to help and starting next week we are getting some availability..
Call Us Anytime.. 1-305-292-7212