January 4 2018 – The smokers are coming, the smokers are coming. The King Mackerel over 25 lbs are called “smokers” in the world of King Mackerel fishermen. Some say because they taste great smoked and others say they are named this because when they hit they just smoke the line off the reels. January is a great month for a shot at a “smoker” kingfish. The Kingfish Mayhem fishing tournament is held here every year in January and some of the largest kingfish of the SKA (Southern Kingfish Association) tournaments entries are caught right out of Key West. With our largest fish coming from fishing the Dry Tortugas Fort Jefferson area waters. 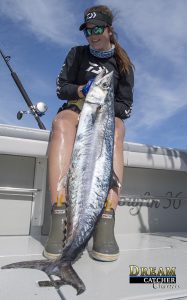 Known as smokers for their ability to run and tear off massive line. These fish are fast and unpredictable. K.T. poses with her trophy she caught fishing Key West with me on my 36 Yellowfin center console.

You don’t have to go that far to catch big kingfish out of Key West. Just off our coast to the reef line anglers can get a shot at a decent sized kingfish using live baits, trolling artificial or jigging. Just about 2o minutes from our dock here at Sunset Marina we can start the effort to catch our anglers a nice “smoker” and give them the feel of a fish that will seemingly never stop running the line off the spool. A super exciting fish to catch and a true crowd pleaser.

This week I was able to get out myself and introduce K.T. to her first kingfish. Heading out in my 36ft Yellowfin Center console we make short work of the distance between my dock and great fishing on the reef line. Along the way we caught a few live blue runners for baits to fill the live bait well which are also fun to catch on light tackle. A good sized blue runner of about 15 inches or better makes for Kingfish candy fishing here in Key West. We gave those blue runners a ride to the reef and hooked them up in their rigs to send them back on a slow troll. I usually only put one bait out at first to see how fast the bite is going to be. Generally it wont take long just like this day. As I dropped the first bait back and clicked one of my motors in gear to go super slow I saw out of the corner of my eye the subtle flash of a kingfish eating his prey. Our blue runner was his prey and off to the races. K.T. was ready to reel him in as fortunately for her first fish it was a smaller “snake” in the 12 lb range. A great starter kit for her on the first day of King fishing. With out much event K.T. reeled that one in and then the next and then the big guy hit. By the initial run and the size of the flash I knew it was a good size fish and she would be in for a battle. Maneuvering the boat and coaching her was easy, this being her third fish on. She worked this guy for about 25 minutes and brought him right to the side of the boat for the gaff shot. A 34lb king mackerel – nice work..

We fish for kingfish allot here out of Key West because it is fun. The food value of this fish is not stellar unless smoked and then you have some incredible ingredient for fish dip spread. Put me in a corner with a pint of that and some Ritz crackers and call it a day. Check Out Island Genns Smoked Fish Dip Recipe. For visiting anglers that come fishing with us this time of the year kings are a really fun part of the day that everyone can participate in. I highly recommend trying for at least one while you are fishing here on the reef or deep sea fishing out of Key West.

I like to use very light tackle for these fish which makes it more exciting. Using a super soft tipped conventional rod with a fast retrieve lever drag conventional reel like the Daiwa Saltiga hyper speed lever drag I have found is the best way to stay hooked up with the type of rigs I use to catch these really soft skinned fish. A stinger rig is my choice for live bait. I use an Aki 6/0 for the nose hook and trailing behind I like a #3 treble in the back of the dorsal of the bait all components are connected to a #5 wire with about a 18″ lead to a smallish swivel. Off of that I like to join that swivel to a 30# fluorocarbon line to my 12 – 20# running line. I did say light tackle – Right?

Book your Key West reef fishing charters with us here at Dream Catcher Charters in Key West.
Experience light tackle fishing at its finest on the nicest boats in Key West.