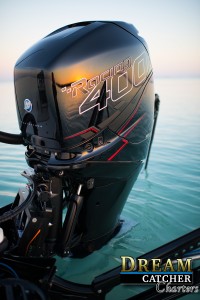 The Mercury Racing 400R lives up to the hype and more. When I heard about the new motor coming out of Fond Du Lac WI at Mercury Marines High Performance division called Mercury Racing my heart skipped a beat. I thought, man what would it be like to put one of those things on a Yellowfin 24 bay boat? I betcha she would scream. Thats just what I did.

Be Sure To Check Out The Video
At The Bottom Of This Page..

The New Mercury Racing 400R is based off the ever popular — and becoming a cornerstone in outboard power in-line 6 cylinder Verado.  A supercharged motor that has set the industry on its rear with low end 4-stroke power that equates to mountain moving acceleration, killer fuel economy and the reliability of a car motor. As one of the engineers said to me once. “There is always more power to be had in any platform, we just have to find it”.

[embedyt] https://www.youtube.com/watch?v=j_bsEetJaEU[/embedyt]Now we have the Mercury Racing 400R. Rated at 400 HP on 91 octane fuel or higher this 400 horsepower version of the Verado has some really cool innovations built into it to make it a reliable source of high performance power. Something that many of us in the industry have been waiting for. 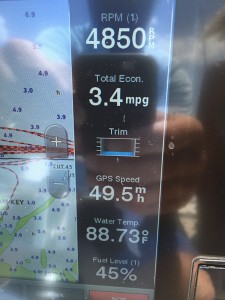 August 15 2015 Update – The Mercury Racing 400r seems to be getting just broken in at 200 hours. totally flawless operation going into the second oil change. I am running the motor pretty hard with long runs in the 5000+ Rpm range. My fuel economy is crazy. I am able to run close to 50 mph with the 400r and get the same fuel economy at 40 with the 300 Verado. See attached Photo..

Its All About Being Really “Cool” Cool Air, That Is

Pulling more horsepower out of an outboard motor that has proven itself reliable can be a risky task. Stability is something Mercury Racing did NOT want to give up by increasing the power on this inline 6 cylinder platform. So they looked for areas that made the engine pull harder but not sacrifice reliability. They started with breathing. Being able to efficiently pull air into the engine so it can do its thing is very important. The engineers at Mercury Racing started there. By redirecting the outside air more efficiently into the intake system without giving it a chance to heat up by swirling around the powerhead. So the rear intake acts as a conduit to direct the outside air straight into the intake avoiding unnecessary obstructions, added turbulence and heat. The engineers knew that if they could cool the air coming in the motor even more than was being done prior they had a home run. So they created an entirely new way to water cool the supercharger as it was compressing the air. By cooling the air while it is being compressed the after cooler (charge cooler) has less work to do bringing the air even lower before sending it in the cylinder to go to work and everyone knows cold air makes more power. Pretty Cool, Huh?

Here It Is Without the Geek-an-ese..

So what they did was brought the air in more efficiently, cooled it off even more which allows more fuel to be pressed into the air fuel mixture creating a more powerful boom without jacking up compression and making the motor more unstable. Cool air means bigger horse power in any combustion engine. A little twist in the mapping on the computer and wham 400 Horse power at 91+ octane with a 7000 rpm range with robust torque improvements. Seems easy enough.. Right? 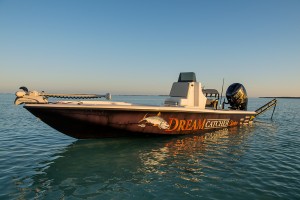 With this much more horsepower and torque in the Mercury Verado 400R you know they had to beef some stuff up. The new cylinder head is massive. With 7000 rpm of mashing gass and air the head needed to be strengthened.

There are also two choices of gearcases for this motor. The 5.44 HD for applications that run under 80 mph and the Sport Master for the go fasters that need enhanced handling features and high x dimensions to achieve super speeds. Both proven in offshore racing and fishing to be super strong and able to withstand the beating that this motor will endure from the excitement of its owner exercising all of the potential out of it. The 400R also has more rigid motor mounts than standard versions of the now legendary Verado as the assumption is speed will be the focus. From the prior generation 350 SCi platform, Mercury Racing used similar guide plates to keep the engine rock solid as it rolls thought he water at blistering speeds adding improved handling.

Not quite artificial intelligence but almost.. The Mercury Racing 400R may be the most advanced self compensating engine ever built. With the self regulating boost valve this outboard can compensate for boost values in any atmospheric condition to match the computer maps needs to make optimum horsepower. A knock sensor that kicks in and decreases its power when it sensed knock that may be caused from lower octane fuel this will allow the operator to run octane values as low as 89 adding to the convenience from pump to pump. Take this engine anywhere as the 400R can devlope more optimum horsepower at altitude than any competitor. Along with all that “smart” stuff going on in the 400R this motor also protects itself from any other lacking values such as low oil pressure, water pressure and a dozen more things that might be an issue for continued operation. Basically its protecting itself as your investment. Frankly for me its kind of intimidating. Its safe to say, there’s not another engine out there that is so “self aware”.

Happy boating.. Email me if you have any questions about this engine, I am happy to share.