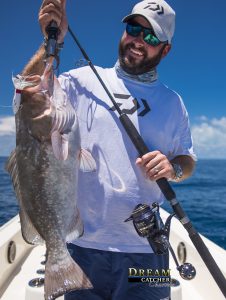 May 1st 2016 – Its here. The anticipated grouper season of the South Atlantic fisheries has opened. Here in Key West we get red grouper, black grouper, scamp and gag for the short list of the deliciously edible table fare of the deep. One of my favorite fisheries here in Key West mostly from just the fight and the reward.

Grouper have been a huge part of Key West reef and wreck fishing for as long as we have been catching fish here in the American Carribean. The 8 month recreational grouper season for the South Atlantic has helped to bring back stocks of these tasty game fish making them easily available not only in quantity and quality of fish but also geographically. I feel that since the season has been implemented we don’t have to run as far to catch these tasty game fish. In fact, our backcountry fishing charters are catching legal sized grouper every day.

With these limits in place for each person participating in the harvest there will be plenty of meat to go around for a well appointed dinner or lunch at our local “hook and cook restaurants”  here in Key West.

Releasing grouper is pretty easy if not caught in super deep water (deeper than 70ft). So, if they are brought up nice and steady when being caught and they don’t measure up to the chefs expectations a release back to the wild is possible. 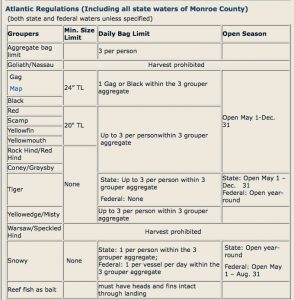 Because grouper season is so long and the area we have to fish for them so vast, there is no rush to get on the bite and make your way into the fishery. Grouper fishing charters are a fun way to enjoy the summer fishing days here in Key West. Generally calmer winds in the summer make the longer runs more friendly on anglers to get out to these tasty game fish. When looking for a Key West fishing charter that specializes in grouper, check out the Wreck and Reef fishing trips. Most of these fishing guides use a 24 – 36ft center console to get their anglers to the fishing grounds fast, smooth and comfortable.

For the DIY guy coming to Key West grouper fishing is pretty easy as long as you have the tools. Decent sonar, live bait such as pin fish, finger mullet or thread fins – Dead bait such as ballyhoo or cut mullet. Make sure you have some lead sinkers to make some rigs with. We like to use fluorocarbon leader and braided line for our grouper fishing. Where to go is easy, find some good bottom in 12 ft of water and start fishing. Drifting covers more ground than anchoring and saves the coral from your dragging. Stay on your game though.. When one of these ground pounders line up on your bait and inhale it – HANG ON.. he will proceed to give you a free tour of whatever you were fishing around..

Limits on grouper as far as sizes and numbers are established here in this chart that is found on the Fish And Wild Life Commission web site.

Check out Island Genns fried grouper recipe here online at www.thekeywester.com
Give Island Genn a call if you need a grouper fishing charter.
1-305-292-7212

Notes on Gear.. I am a huge fan of the Daiwa Dogfight spinning reel for grouper fishing. Tons of lift from a reel that just does not know when to quit. I seem to be able to lift a fish better using a spinning reel than a conventional and most of my anglers agree.

Check Out The Article about the Daiwa Saltiga Dogfights.