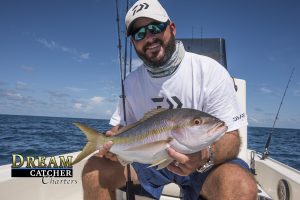 March 21st 2017 – Northerly winds prevail with cooler temps all this week so far since our last cold front which brought us down to the low 60s in air temps. The reef stayed pretty nice and the water quality is perfect. Looks like a little bit of a blow starting on Friday the 24th but mellowing out by Sunday the 26th of March.

The last week or so the reef fishing has been really good coming off the full moon. Some sizable yellowtail snappers as well as muttons were reported from several of our trips we sent out on the reef. The conditions were not all that awful with seas in the 2-3 ft ranges and manageable currents. Grouper season in the Atlantic is still closed till May 1st, that said our boats are releasing lots of nice fish.

The bonus on the reefs this week have been the large kingfish that have been caught by opportunity or mistake while fishing the reef. Here at Dream Catcher Charters we have caught some king fish in the 25 – 30 lb range with some really nice cero Mackerel in the 8-12lb range. Another Rock Star on the reef is the delicious yellow jack. We are always watching out for the sailfish up on the reefs as well. April is a great time for sailfish here in Key West.

Reef fishing trips are 4 6 and 8 hours in length. They start at 700.00 for the 4 hours and go up. March and April are great times to fish the reef.