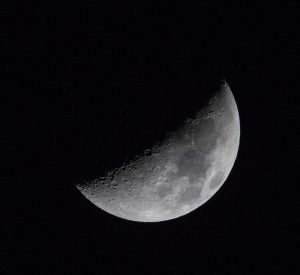 Full Moon is a great time for tarpon fishing if you know when and how to fish for them.

Fishing in Key West is always good, right? Well, yes, it is. People ask me all the time, “how’s the fishing?” I respond by saying “fishing is great; it’s the catching that gets tough from time to time.” Well, part of that answer lies right here in this little article about tarpon fishing during the full moon. I am going to try, with words, to help the reader understand for a minute what tarpon do during the full moon, how it affects the Key West fishing, and ways to work around it to still have your shot at the silver king in the daytime.

First off, let’s talk about the full moon. It’s really bright and it floods the waters with a very sexy glow of moonlight. It casts a really good shadow on everything, and at its peak on a clear night it is mesmerizing to everything under its glow. In addition, the tides are at the extreme for that month which means that we have the highest tides of the lunar cycle during the full moon. The estuaries are flushed with loads of water flow moving in and around the islands, dragging bait and shrimp out into the open as they bask in the glow. The additional flow also brings pretty clean water in too.

Now, let’s talk about tarpon. These fish are fully equipped with great night vision, with big eyes that can see really well in the dark. Tarpon also have a general appetite for feeding at night under the cover of darkness that keeps the sun off their silver sides which can give up their position to a predator or to their prey. So, let’s say that tarpon are pretty damn comfortable feeding at night because they are good at it and have the tools. 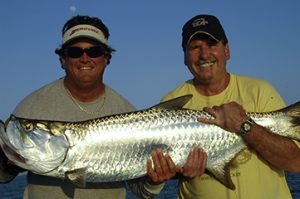 Fishing in the late evening golden light during the last parts of the full moon you see in the background.

Last, let’s talk about tarpon food. Baitfish, shrimp, crabs and whatever else swims around in the tide flow can provide a tasty meal for a tarpon. Guess where they are looking during a full moon? Yup, UP. Seems like everything in the water that is good to eat is all drawn to light like flies on the back porch, and when there’s a full moon that light is everywhere and all the little critters worship it. So there they are, swimming around thinking it’s all cool casting a pale moonlit shadow of a tarpons favorite food, having NO IDEA what lurks beneath. They are all drawn to light.

Let’s review. Cleaner water, great flow with loads of baitfish, and clear skies. That is a buffet made for a tarpon, and they take advantage of it. Like drunken sailors at a .25 cent draft bar, tarpon will feed really hard in the early morning during the peak of the full moon and into the first light. After about 8 am, the tarpon bite can slow down considerably. Then it is up to your fishing guide to get the fish to feed the rest of the day when they are full by enticing the fish’s strike instinct which we have mastered here at Dream Catchers. Otherwise, what I do is take to the flats and look for other species that react well to the full moon tides such as permit, bonefish or barracudas to add to my anglers list of species.

When is the best time to fish for tarpon during the full moon? After reading this article many would say, well, at night. And one would not be completely wrong, but keep this in mind. We tarpon fish partly because we love to actually see them jump. During a full moon, they can eat anywhere they want, anytime they want; it’s not regulated to an artificial light source, and the night fishermen have a harder time catching them during a full moon because of this. Personally, after seeing three tarpon in my career jump into a boat at night, I kinda think its dangerous. It is hard to see, and therefore, it is hard to avoid potential mishaps. On top of that, frankly, it is  just not as enjoyable.

So, what to do? During a full moon I recommend that folks focused on tarpon fishing go in the late afternoon. By the stretch of the day the tarpon have had their chance to recover from the hard core feeding they did all night the night before. They are ready to start again. I like to be there for that. 3 – 4 hours before sunset can be the magic time to feed a hungry tarpon that does not want to wait until the party starts when the moon comes up. Kind of a pre-party snack. There is nothing like hitting them when they are hungry. The alternative to this is early in the morning. I like to get off the dock around 5 am to get out to my favorite spot at the last part of the feed and have a  few in the air before sunrise. Keep in mind, your fishing guides fish a schedule that is very rigorous and they will get it done when they are out there; it is not a good idea to dictate to a tarpon fishing guide when YOU want to fish based off of some article you read on the internet the day before you head out. However, it can be a great tool for planing your next tarpon fishing trip to Key West.

So, there you have it. A full explanation of full moon tarpon fishing.

The photo illustration I used here is NOT a full moon but I thought it was a pretty cool shot that I captured one night off my back porch.