March 4th 2018 – Every since we started using the words “backcountry fishing” in our marketing back in 2004 there has been a little confusion. Of course every time a company sets out to fine tune the market that they are in, there is a little explaining to do. In the end, its better for the prospecting client to get exactly what they are looking for. In this case its a flats or backcountry fishing charter.

Flats Fishing and Backcountry Fishing are done in the same place.

The flats are located in the backcountry waters off the Florida Keys and Key West. The backcountry holds all the flats.
Definitions

Flats Fishing is a discipline more than a geographic location. 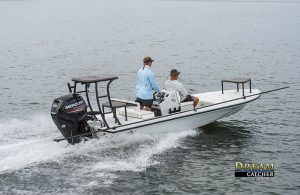 Flats Fishing Boat. Poling Skiff. Notice the platform in the back where the flats fishing guide stands. This is my personal poling flats fishing skiff. It is 17ft long. Floats in 8 inches of water. I use this boat just for Key West flats fishing.

Flats fishing has a long history here in the Florida Keys and Key West. Flats fishing guides have been using small flats fishing skiffs with long poles equipped with feet to ease across the shallow flats in search of a sport fish such as a bonefish, tarpon, permit, barracuda, mutton snapper or redfish since the turn of the 1900s. For a long time this way to go fishing in the Florida Keys was simply called “bonefishing“. Now keep in mind these fish are the spookiest fish in the sea. Being quiet and patient are critical to the success.  The discipline is sight fishing. If you are flats fishing, generally there is a fishing guide involved spotting or pointing out the fish from behind you as you try and make an accurate cast with a spin fishing rod or fly fishing rod based on the fishing guides casting directions. The directions are vessel related figuratively using the hands of a clock with distance to imagine casting directions.  The discipline comes from being able to listen, be accurate and accomplished with the tools to present an offering to entice the sport fish to eat. Once the fish is hooked the team work between guide and angler is critical to landing some of the harder running sport fish, especially when using a poling skiff where maneuvering is challenged.

Because the flats can be very shallow and the shots at sport fish limited the “flats fishing” experiences are limited to two anglers. The boats we use are either traditional flats fishing poling skiffs that range in size from 16-18 ft. Or with the advent of lighter materials for building boats and the increased technology of trolling motors bay boats are fast becoming a formidable way to go flats fishing for the angler that does not mind tossing tradition to the curb to catch fish. The key for a good flats fishing boat is to float shallow, be quiet, yet be able to cross larger water without a beating. Remember – traditional flats fishing is done on a traditional poling skiff.

Flats fishing tournaments currently are all done on board traditional poling skiffs with two or less anglers and the rules dictate fish must be caught in “pole-able” depths of water. No trolling motors allowed.

Flats and backcountry fishing are all done in the same area. With the advent of bay boats I was looking at a whole new world of fishing for anglers who did not want to step on a tippy little poling skiff and get yelled at all day for missing a cast. The bay boats are 24ft long, room for up to 4 anglers and as a fishing guide I could stand right on the bow of the boat with my anglers and help them along the way to success as a fisherman no matter what level they started off at in the morning. Truly a liberating way to fish for this die hard flats fishing guide from the 90s. If it were not for bay boats I was going to become a fossil. 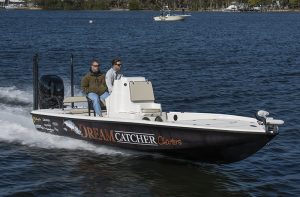 My Personal bay boat. The Yellowfin 24 bay boat Carbon Elite. Floats in 10 inches of water. I can fish the flats, backcountry, Marquesas Keys, shallow wrecks and the reef fishing in this boat.

Still the same species of fish are targeted. Tarpon, permit, bonefish, barracudas, redfish and mutton snappers. In fact when I first started using bay boats my catch ratios were larger due to a few factors. Trolling motors covered more ground, I was able to help my anglers, I was able to fish anywhere any day no matter the winds and that provided my anglers with more shots = more fish ultimately = happier clients = more business. it was a win win. So.. Add that to an additional fishery in the backcountry. Trout, snapper, bluefish, sharks, jack crevalle, yellowjacks, cobia and pompano now I needed to come up with a term to define a day of “just fishing” so I called it “Backcountry Fishing”. As a dicipline the trip is more relaxed. Anglers can actually hold a beer and fish. Kids can catch and feel like heros. Wives and girlfriends feel more comfortable coming along and usually out fish the men.

Wait.. there was more.. With a bay boat I was not constrained by fishing just in the backcountry or on the flats. On nicer days I was able to stretch my legs and hit close wrecks and the reef adding to my fishery 10 fold. As it turns out and the obvious success of the company I built Dream Catcher Charters where 80% of our charters are now backcountry fishing it was a Huge win.

Im not saying one is better than another.. I still love to get on my poling flats skiff and guide..

Here are some rules of thumb.

So, I hope that helps. Maybe your even more confused but at least I tried. I think it is super important that folks spending anywhere from 450 – 800.00 for a fishing charter should know exactly what to expect in terms of equipment, the experience, the surroundings and what is expected of them. The more folks know the more they are apt to try it.

If you would like to learn more.. drop us a Line..