Jamie with one of his Key West Permit Caught On the Flats.

October has been exactly what it is supposed to be weather wise.. Like someone flipped a switch we went from Summer, humid and rainy to Fall, dry and awesome..

The flats fishing here in Key West has been great.. During this new moon phase we have experienced some great tides bringing all sorts of fish up on the flats to feed. Water temps have been down in the low 80’s and I even saw some 79 degree temps.

There is still some tarpon fishing around the flats. Two days ago we got into a fun shrimp hatch. This is where the shrimps come off the flats on an outgoing tide first thing in the morning. Flat calm conditions are needed for this to work well. The southern side of the flats or the down current side hold the fish cruising along looking for a snack. I use the white Hogy 7 inch on a light hook and a really slow presentation. These tarpon are jumpers when they feel the sting and hard to boat unless the angler is seasoned. Either way loads of fun.

Permit fishing has been off the charts.. Lots of action on the flats with tailers. Tough shot if its flat calm as those fish are very weary. Use a smaller crab than usual and lighten up your casting line. I like to use the FINS situation braid 10lb test for my anglers to get the most of their cast. Followed up by a 12lb Calcutta fleoro leader. As a guide I like Yellow line for visibility. On the edges of the flats during the lower tides I am getting into some STUD permit that just cant get on the flats due to depth of the bodies. These fish eat a larger crab and don’t hesitate if presented well. 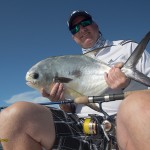 Jamie with one of his Key West Permit Caught On the Flats.

October is bonefishing peak season. The bones are breeding this month and get really fat. Fish in the 8 and 9 lb range are not uncommon this time of the year if you know where to look. The larger fish are pretty smart so stay quiet and cast lightly. Presentation is everything.

There are few things I enjoy more during the fall months than guiding flats fishing charters. To me its what makes fishing in the Florida Keys and Key West so romantic. The bond of angler and guide hunting down a fish and making him famous.

The government shut down really sucks for a lot of fishing guides in the Northern Keys. Our waters are completely open and ready to fish..